GREER, SC— The community of Greer has looked to The Wood Mortuary for caring service since 1902 when John D. Wood established a funeral and undertaking business on the second floor of his grocery and hardware store. Today, his grandson and President Richard H. Wood, Jr., continues the family tradition, keeping pace with the times.

Greg Jones, Manager, credits Mr. Wood for his foresight in initiating a major renovation to the preparation room. With a goal of providing the embalmers with a safe, comfortable and efficient work space with emphasis on air quality, Mr. Jones called on Duncan Stuart Todd, Ltd., to design and equip the space utilizing the Premier Source plan.

Although he has been in funeral service for forty years and was confident that he was fully knowledgeable, Mr. Jones was pleased to learn about new up-to-date equipment. On completion of the renovation, he was rewarded, commenting that the staff of ten funeral directors is “ecstatic.”

The project was not without challenges, however. In a constricted 20-ft. by 20-ft. space, there was no room for expansion. Solid exterior brick walls protected the chapel, the loading dock and an area housing eight air conditioning units. Furthermore, it was necessary to build a temporary embalming room elsewhere on the property while the new room was being built. “The construction team,” Mr. Jones declared, “was the best of the best.” With Duncan Todd, AIA, at one end of the telephone, and a well experienced contractor at the other, each respecting the other’s expertise, the outcome was a predictable success.

Completed in early 2017, the two-station room meets twenty-first century standards for a modern preparation room. Safe air that meets OSHA standards is assured for the general airstream with PrepAir G2, enhanced with PrepArm localized exhaust ventilation. Speaking for the staff, Funeral Director and Embalmer Myron Paris had a word. “Awesome,” he said, “the result is far beyond what we could have imagined, even with such simple things as a foot pedals on the sinks. The water pressure on the hydro-aspirator is phenomenal and the Mortuary Lift is so convenient. Custom cabinetry with coordinated interior finishes adds to the overall efficiency and aesthetics.

Greer, situated between Greenville and Spartanburg, had originally been a cotton mill town, and there was some fear that it would become a ghost town. The community was saved by an infusion of industry, led by BMW who hired 8,000 employees. Now it is a thriving area along the I-85 corridor between Atlanta and Charlotte. 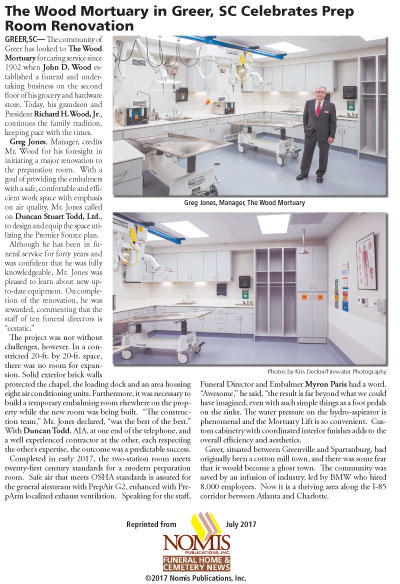