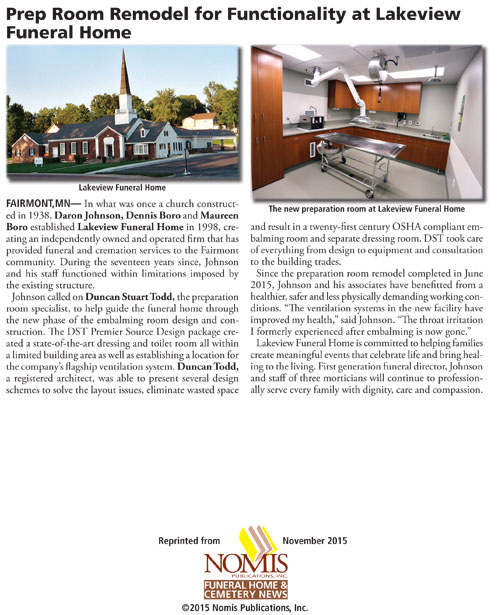 In what was once a church constructed in 1938, Daron Johnson and Dennis and Maureen Boro established Lakeview Funeral Home in January 1998.  During the seventeen years since, he and his staff have functioned within limitations imposed by the existing structure.  Since June 2015, however, when he completed a remodel of the preparation room, Mr. Johnson and associates are benefitting from healthier, safer and less physically demanding working conditions.

To guide him through a total re-do of the embalming room, Mr. Johnson called on Duncan Stuart Todd, Ltd., The Preparation Room Specialists, taking advantage of the firm’s Premier Source package.  The design challenges included formulating a layout for a preparation room, a dressing room and toilet room all within a limited building area as well as establishing a location for the company’s flagship ventilation system.  Duncan Todd, a registered architect, was able to present several design schemes to solve the layout issues, eliminate wasted space and result in a twenty-first century OSHA compliant embalming room and separate dressing room.

Lakeview Funeral Home is independently owned and operated and provides funeral and cremation services to the Fairmont community.  As a first generation funeral director, Daron Johnson came to the death care profession after having earned a biology degree.  Influenced by a high school friend whose father owned a funeral home in Estherville, Iowa, Johnson enrolled in Worsham College of Mortuary Science.  A native of Estherville, he credits this small community with having provided good role models, noting that a record 38 licensed morticians have called it home.

“The ventilation systems in the new facility have improved my health,” Mr. Johnson comments, noting that the throat irritation he formerly experienced after embalming is now gone.  Another benefit of Premier Source he cited is that DST took care of everything from design to equipment and consultation to the building trades.

Mr. Johnson’s civic work includes participation in the Kiwanis club, service on the board of directors of a nursing home, church and the local fire department from which he retired after twenty plus years as a volunteer.  His staff includes three morticians, two of whom also serve as volunteer fire fighters.  He is a member of the National Funeral Directors Association and the Minnesota Funeral Directors Association.  Fairmont, situated in the heart of southern Minnesota, is the county seat of Marin County, with a population of 11,000.