WILMINGTON, NC — Doug Bevell opened Wilmington Mortuary Service in 1998 to serve funeral directors in his North Carolina community. This past winter he was in the process of constructing a new building to better serve his clientele. 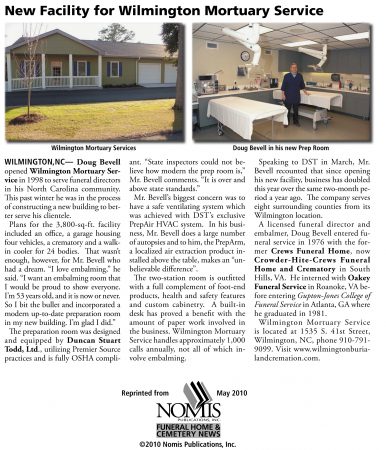 Plans for the 3,800-sq-ft. facility included an office, a garage housing four vehicles, a crematory and a walk- in cooler for 24 bodies. That wasn’t enough, however, for Mr. Bevell who had a dream. “I love embalming,” he said. “I want an embalming room that I would be proud to show everyone. I’m 53 years old, and it is now or never. So I bit the bullet and incorporated a modern up-to-date preparation room in my new building. I’m glad I did.”

The preparation room was designed and equipped by Duncan Stuart Todd, Ltd., utilizing Premier Source practices and is fully OSHA compliant. “State inspectors could not believe how modern the prep room is,” Mr. Bevell comments. “It is over and above state standards.”

Mr. Bevell’s biggest concern was to have a safe ventilating system which was achieved with DST’s exclusive PrepAir HVAC system. In his business, Mr. Bevell does a large number of autopsies and to him, the PrepArm, a localized air extraction product installed above the table, makes an “unbelievable difference”.

The two-station room is outfitted with a full complement of foot-end products, health and safety features and custom cabinetry. A built-in desk has proved a benefit with the amount of paper work involved in the business. Wilmington Mortuary Service handles approximately 1,000 calls annually, not all of which involve embalming.

Speaking to DST in March, Mr. Bevell recounted that since opening his new facility, business has doubled this year over the same two-month period a year ago. The company serves eight surrounding counties from its Wilmington location.