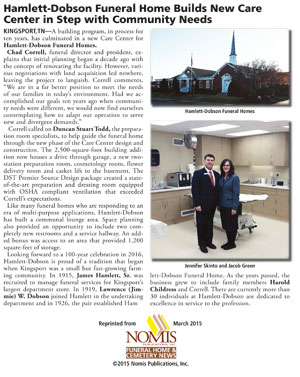 A building program, in process for ten years, has culminated in a new Care Center for Hamlett-Dobson Funeral Homes.
Chad Correll, funeral director and president, explains that initial planning began a decade ago with the concept of renovating the facility. However, various negotiations with land acquisition led nowhere, leaving the project to languish. “As a result,” Mr. Correll comments, “we are in a far better position to meet the needs of our families in today’s environment. Had we accomplished our goals ten years ago when community needs were different, we would now find ourselves contemplating how to adapt our operation to serve new and divergent demands.”
Mr. Correll called on Duncan Stuart Todd, the Preparation Room Specialists, to help guide the funeral home through the new phase of the Care Center design and construction. The 2,500-square-foot building addition now houses a drive through garage, a new two-station preparation room, cosmetology room, flower delivery room and casket lift to the basement. The DST Premier Source Design package created a state-of-the-art preparation and dressing room equipped with OSHA compliant ventilation that exceeded Mr. Correll’s expectations.
Like many funeral homes who are responding to an era of multi-purpose applications, Hamlett-Dobson has built a communal lounge area. Space planning also provided an opportunity to include two completely new restrooms and a service hallway. An added bonus was access to an area that provided 1,200 square-feet of storage.
Looking forward to a 100-year celebration in 2016, Hamlett-Dobson is proud of a tradition that began when Kingsport was a small but fast-growing farming community. In 1915, James Hamlett, Sr. was recruited to manage funeral services for Kingsport’s largest department store. In 1919, Lawrence (Jimmie) W. Dobson joined Mr. Hamlett in the undertaking department and in 1926, the pair established Hamlett-Dobson Funeral Home. As the years passed, the business grew to include family members Harold Childress and Chad Correll. Today more than 30 individuals at Hamlett-Dobson are dedicated to excellence in service to the profession.
Hamlett-Dobson is based at 117 East Charlemont Avenue, Kingsport, TN 37660, with a crematory and pet service in Fall Branch.