AIKEN, SC — The George Funeral Home and Cremation Center, Inc. has a proud reputation as the fourth oldest funeral home in South Carolina. Owners since 1999, Ray and Alicia Visotski are only the third family to own and operate the historic business which was named the Best Funeral Home in Aiken county 2003, 2004 and 2005. 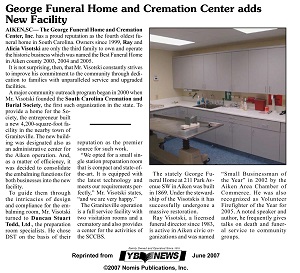 It is not surprising, then, that Mr. Visotski constantly strives to improve his commitment to the community through dedication to families with unparalleled service and upgraded facilities.

A major community outreach program began in 2000 when Mr. Visotski founded the South Carolina Cremation and Burial Society, the first such organization in the state. To provide a home for the Society, the entrepreneur built a new 4,200-square-foot facility in the nearby town of Graniteville. The new building was designated also as an administrative center for the Aiken operation. And, as a matter of efficiency, it was decided to consolidate the embalming functions for both businesses into the new facility.

To guide them through the intricacies of design and compliance for the embalming room, Mr. Visotski turned to Duncan Stuart Todd, Ltd., the preparation room specialists. He chose DST on the basis of their reputation as the premier source for such work.

“We opted for a small single station preparation room that is compact and state-of- the-art. It is equipped with the latest technology and meets our requirements perfectly,” Mr. Visotski states, “and we are very happy.”

The Graniteville operation is a full service facility with two visitation rooms and a crematory and also provides a center for the activities of the SCCBS.

The stately George Funeral Home at 211 Park Avenue SW in Aiken was built in 1869. Under the stewardship of the Visotskis it has successfully undergone a massive restoration.

Ray Visotski, a licensed funeral director since 1983, is active in Aiken civic organizations and was named

“Small Businessman of the Year” in 2002 by the Aiken Area Chamber of Commerce. He was also recognized as Volunteer Firefighter of the Year for 2005. A noted speaker and author, he frequently gives talks on death and funeral service to community groups.