SALLISAW,OK— With more than a century of funeral service as a heritage, Agent Mallory Martin Funeral Home is firmly committed to serving the families of Eastern Oklahoma with personalized and caring attention. Today, two generations of the Martin family nurture that commitment. 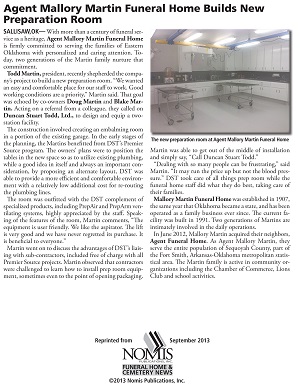 Todd Martin, president, recently shepherded the company’s project to build a new preparation room. “We wanted an easy and comfortable place for our staff to work. Good
working conditions are a priority,” Martin said. That goal was echoed by co-owners Doug Martin and Blake Martin. Acting on a referral from a colleague, they called on Duncan Stuart Todd, Ltd., to design and equip a two-station facility.

The construction involved creating an embalming room in a portion of the existing garage. In the early stages of the planning, the Martins benefited from DST’s Premier Source program. The owners’ plans were to position the tables in the new space so as to utilize existing plumbing, while a good idea in itself and always an important consideration, by proposing an alternate layout, DST was able to provide a more efficient and comfortable environment with a relatively low additional cost for re-routing the plumbing lines.

The room was outfitted with the DST complement of specialized products, including PrepAir and PrepArm ventilating systems, highly appreciated by the staff. Speaking of the features of the room, Martin comments, “The equipment is user friendly. We like the aspirator. The lift is very good and we have never regretted its purchase. It is beneficial to everyone.” Martin went on to discuss the advantages of DST’s liaising with sub-contractors, included free of charge with all Premier Source projects. Martin observed that contractors were challenged to learn how to install prep room equipment, sometimes even to the point of opening packaging. Martin was able to get out of the middle of installation and simply say, “Call Duncan Stuart Todd.”

“Dealing with so many people can be frustrating,” said Martin. “It may run the price up but not the blood pressure.” DST took care of all things prep room while the funeral home staff did what they do best, taking care of their families.

Mallory Martin Funeral Home was established in 1907, the same year that Oklahoma became a state, and has been operated as a family business ever since. The current facility was built in 1991. Two generations of Martins are intimately involved in the daily operations.

In June 2012, Mallory Martin acquired their neighbors, Agent Funeral Home. As Agent Mallory Martin, they serve the entire population of Sequoyah County, part of the Fort Smith, Arkansas-Oklahoma metropolitan statistical area. The Martin family is active in community organizations including the Chamber of Commerce, Lions Club and school activities.