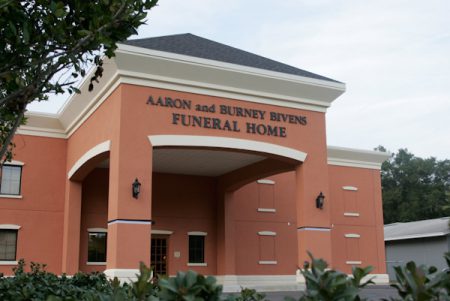 ORANGE PARK, FL — Burney Bivens, a practicing attorney, joined his son, Aaron, in mortuary school in 2006 before the father and son team opened a funeral home in Orange Park in August 2009. Mr. Burney Bivens maintains his law office, established in 1982, while holding the title of Funeral Director in Charge for the new venture.

The Messrs. Bivens began their planning process in 2005. Wanting to have a visible presence and convenient location, they scouted their town and settled on a
vacant hardware store on one of the city’s thoroughfares. In time, they expanded their vision, demolished the building and erected a new 14,500 sq. ft. facility.

Interestingly enough the entire venture became father/son throughout: Aaron and Burney Bivens; Thor Heinrichs Architect father and son, Thor and David; and Duncan Stuart Todd who had been in business with his architect father, the late J. Stuart Todd. Aaron Bivens is all in favor of families working together.

The preparation room was entrusted to the expertise of Duncan Stuart Todd, Ltd., the Preparation Room Specialists. The Bivens had given much thought to the prep and dressing rooms and submitted their ideas to DST who was able successfully to incorporate them into a total Premier Source design plan.

Mr. Aaron Bivens, Managing Funeral Director, comments on the ease of use of all of the equipment in the 3-station embalming room. He calls special attention to the cabinetry and safety features such as the overhead body and table wash, emergency shower and swing away eye wash which he appreciates. “They are there for use if needed,” he comments, “but not in the way.” “The ventilating system is great and the separate dressing room with overhead lift is very functional,” he continues.

The Bivenses are proud of their new funeral home with its chapel holding 180 persons and two viewing rooms that can open to accommodate large gatherings or serve two viewings with 85 visitors at the same time.

A published article in a local newspaper quotes Burney Bivens, who is African-American, as saying he wants to dispel the idea that the new funeral home will serve primarily the black community. “We will serve the entire community with the same high degree of professionalism and commitment as we have done over the past 27 years in the law practice.”

Burney Bivens has served the North Florida region in various capacities, most recently as a trustee at Bethune- Cookman College, and a member of the Penney Retirement Community Board of Directors. He is a veteran of the U.S. Navy and U. S. Marine Corps.

Aaron Bivens was graduated from Bethune-Cookman College with a bachelor’s degree in business administration. He has an associate’s degree in funeral service from Florida Community College in Jacksonville and is a member of the National Funeral Directors Association.